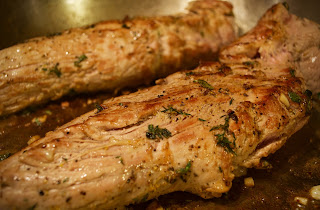 Pork shoulder may make a great carnitas and vegans will go off the wagon for a thick slab of bacon. However, pork tenderloin is overlooked as the star of the other white meat. Your butcher will have it behind the picturesque bone-in chops and restaurants will serve it as medallions - which is what we are creating today.

Unlike the chops, the tenderloin does not need to rest in a brine over night to retain it's juicy texture, but can very easily be over cooked since there is little fat in this cut of meat.


This recipe has a sauce drizzled on top of the pork and bed of mashed potatoes. The subtleness of the fresh squeezed orange juice plays well with the sweetness of the pork and savory garlic and olive oil, while emphasizing the nutty parmesan and earthy chives in the potatoes. 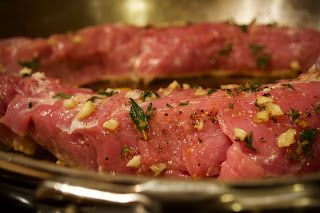 Preheat oven to 400 degrees and start to boil water in large pot for the potatoes. 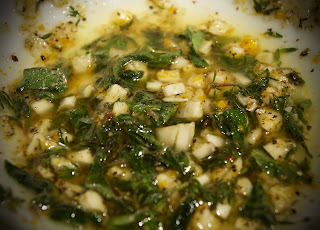 Melt butter in skillet over medium/high heat and add a pinch of pepper and salt, brown for a couple of minutes.  Add onions to butter and toss until fork soft - five or six minutes.

Add the tenderloins to the bowl and massage the mixture into the pork. 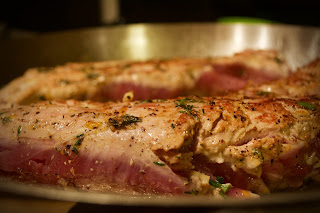 Once the onions are translucent, remove them from the skillet and set aside for later or discard -  be sure to leave the flavored butter in the pan.  Sear all sides of the tenderloins, a couple minutes per side, in the remaining onion flavored butter. If you are using an All-Clad stainless steel skillet, or the like, put the whole skillet in the oven; otherwise transfer the pork and the drippings to a glass pyrex and bake for 20 minutes while you make the mashed potatoes.
Drain the fork soft potatoes, reserving 2 cups of the water. Combine the potatoes, cream, sugar, salt, pepper and butter with the hand mixer to the consistency of your preference, add the water as needed. Once you have the consistency you want, fold the chives and parmesan in and return the covered pot to the stove over very low heat to keep warm. 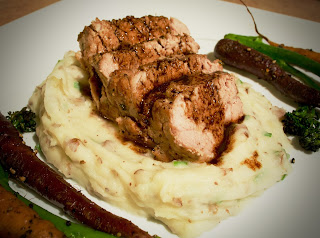 Once the pork reaches 140 degrees remove from oven and skillet to rest while you make the sauce.  Squeeze the juice from the orange into the hot skillet to combine the drippings and excess marinade - reduce for five minutes over medium heat.  Spoon potatoes onto the plate, top with 4 or 5 slices of 1-inch thick pork medallions and drizzle a couple spoonfuls of the orange juice marinade over the entire entree.


written by Unknown
Email ThisBlogThis!Share to TwitterShare to FacebookShare to Pinterest