When it comes to signature dishes, there are no stand alones that are purely Los Angeles; nothing namesake, like Chicago Style Pizza or Memphis Ribs. That gives us the opportunity to perfect the dishes that make their way here. Since there are so many transplants in Los Angeles, there is always discussion as to what city has the best this or the best that. New England Clam Chowder is no exception, and what better way to decide who has the best than with a Chowder Cook-Off? 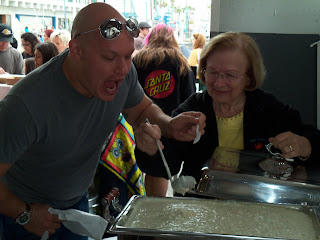 Sponsored by the King Harbor Association, Redondo Beach Pier Association and Quality Seafood, the 3rd annual Clam Chowder Cook-Off held on Redondo Beach Pier, hosted a dozen local establishments who competed to be crowned Best Clam Chowder. For the $7 entry fee (all proceed going to The Wellness Community) you received everything you needed to judge for yourself the various vendors, including a golden ticket that you awarded your favorite chowder. So Shara, Robyn, Sheena,

and I made our way to Redondo Beach Pier to judge the best clam chowder for ourselves.  I felt a little bit like Goldilocks as I tasted my way through the decorative booths: too thin, not enough clams, too many potatoes… All contestants had fantastic chowder, and after a filling afternoon I had it narrowed down to two restaurants, Quality Seafood and Alpine Village. The consistency and flavor of Quality Seafood’s was superb, each creamy bite was as tasty as the last, full of moist potatoes and tender clams, but it lacked the punch needed to receive my Golden Ticket. So alas, the German’s of Alpine Village all the way from Torrance got my ticket. Their chowder, though not as thick as Quality Seafood’s, was outstanding! The rich, creamy broth with chunks of red skin potatoes and tender clams stood out amongst the crowd of award worthy competitors.  Shara's vote went to Quality Seafood's while both Robyn and Sheena voted for Fat Face Fenner's Fishshack.

Shara and I were not alone in our vote either, Quality Seafood and Alpine Village tied for the best Clam Chowder. The debate may rage from the Pacific North West to the East Coast but the people of Los Angeles have spoken and crowned a pair of local champions the Best Clam Chowder in Town. 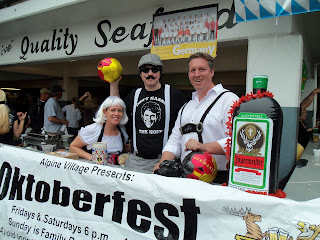 After we had our fill and cast our votes, we made our way over to Tony's on the Pier, who also competed  in the clam chowder cook-off but didn't take home any of our tickets, for a couple of drinks.  Tony's has a circular crow's nest bar atop a restaurant bar with an entrance from the pier and view of the ocean.  The Mai Thai's are great and for the same price as the clam chowder tasting who could argue with a 2nd round.